Feeling “On Top of the World?”

We got this interpretation of  “On Top of the World” from one of Victor’s fans. 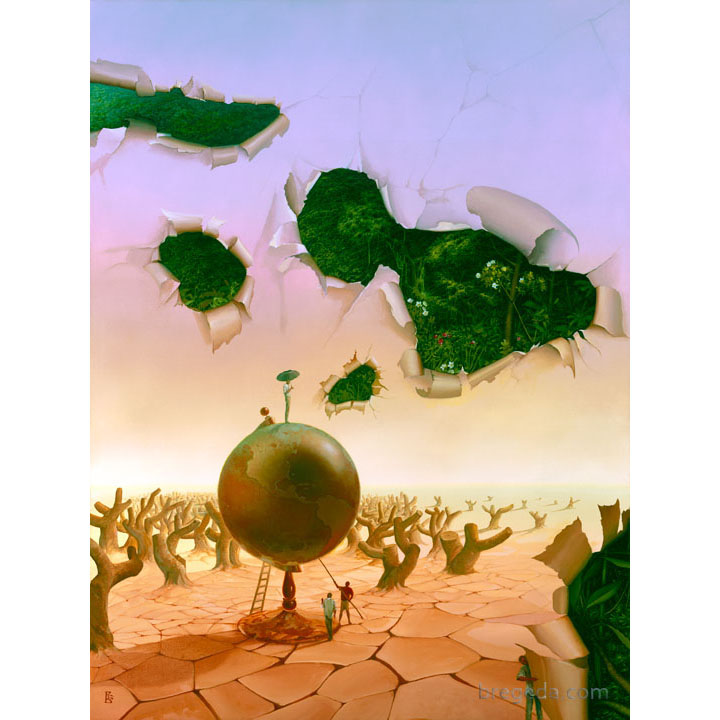 In the painting, the earth is barren and dry, presumably destroyed by man as all the trees have been cut down. The scaly earth and tree stumps almost resemble human skin and hair follicles which suggests that the scene is an emotional state. But this vision is an illusion. As it is being peeled away, it is contrasted by the fertile living green earth behind.

In the story, there is a troubled man who is lost and disconnected from the world. He is searching for meaning and a purpose to his life, represented by his “delirious digging”. He becomes so obsessed that he loses sight of the world and digs his own lair in total isolation.

He slowly climbs his way back out of the abyss only to find that he is “on top of the world”. When he stops to reflect on his journey, he realizes that his perspective has changed, represented by the mountain that has amassed above him, to allow him to see the beauty of the world all around.

Overall, I think the common theme is that our individual perceptions of reality can act as barriers to seeing the truth. The man on top of the world can see life behind the veil of death and destruction. The man on top of the mountain feels a connection with everything after feeling totally isolated. They both suggest transcendence of man, enlightenment, and a connection with God.

Want to join the discussion?
Feel free to contribute!