The Story of Victor Bregeda 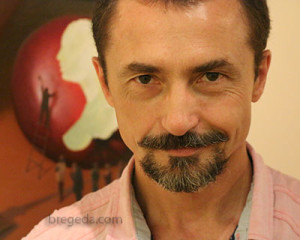 Victor Bregeda is a prominent, visual artist recognized for his unique meta-realistic style of painting. Bregeda was born into a family of painters in 1963 in Taganrog, Russia. The artist has stated that he has been painting for as long as he can remember.

After attending an art school in Russia, Bregeda made a decision to move forward with his personal interpretation of creative art, putting himself in sharp contrast with his academic art training. This rebellious move proved victorious as Victor’s art quickly gained recognition in local and international contests.

In early 2000, Victor’s career took a new turn when he was invited to promote his work in the U.S. His first art show, in Hawaii, became an instant success. Since then, Bregeda’s art has been gaining steady prominence in the international art scene including numerous exhibitions at galleries and museums. The two most recent museum exhibitions include the Museum of Russian Art in NJ and the Museum of Biblical Art in Dallas, TX.

Visiting a Bregeda art show can be an overwhelming experience. His paintings pack so much content and expression that they require extra time and attention for processing. Each artwork is a unique, philosophical journey that often combines hidden clues and multiple storylines. Some paintings appear as riddles with concealed imagery that take observers on a quest to solve them. The artist often provides accompanying descriptions to his visual stories but insists that they should remain open-ended to a viewer’s interpretation. 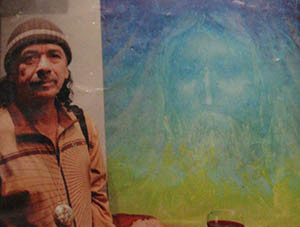 Victor Bregeda has a faithful following of fans around the world that is constantly growing. Many art collectors who discover Victor’s art become instantly “hooked” on Bregeda’s unique style, and they keep coming back to experience more of their favorite art.

Victor Bregeda has been often compared to Salvador Dalí and other masters of the Surrealistic Genre. Victor positions his work in the meta-realism style with some elements of surrealism.

In comparison to meta-realism, surrealism was a much broader cultural movement widely popular in the early and mid 20th century. Meta-realism can be viewed as a later Russian offshoot of surrealism with respect to the imaginative visual style. The key difference is that meta-realism primarily appeals to the superconscious – in Victor’s case strong God’s influence – while surrealism was heavily influenced by subconscious expression. 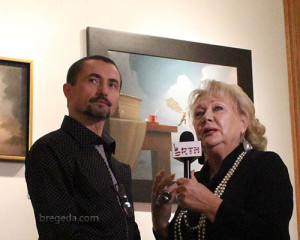 Meta-realism is a direction in Russian art and poetry that was born in the 1970s to the 1980s. Mikhail Epshtein, who coined it in 1981 and made it public, first used the term. “Meta” means both “through” and “beyond” the reality that we all can see; hence, “meta-realism” is the realism of the hyperphysical nature of things. The main expression of its essence is given through a non-visual metaphor or, according to another Epshtein’s term, a “metabola” (rather than hyperbole), that means “transfer” or “transition,” opening many dimensions. “Metabola” is different from the symbol or a “visual” metaphor, because it assumes the interosculation of realities. 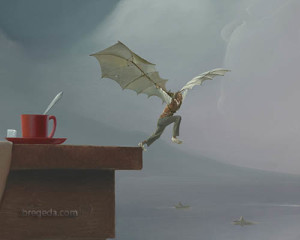 “Leap of Faith” is one of many examples of Bregeda’s unique style.

The key genres of my artwork are plein aire landscapes, still life compositions and portraits performed in a metarealistic style with strong roots in subconscious philosophy. I use a variety of techniques and materials while trying to invent new ones. I attempt to reveal the true nature of things hidden from empirical understanding.

I have been particularly influenced by the smooth techniques espoused by the Dutch school of painting. The artists who inspired me the most were Leonardo Da Vinci, Hieronymus Bosch, Peter Bruegel, Max Ernst, and Nikolai Rerikh. I like the French school of the 18th – 19th centuries as well as the works of Andrew Wyeth. I grew up in a strong creative environment. My artistic abilities are in my blood, thanks to my forefathers.